How to play guide for Above the Fold

From Above the Fold Wiki
Jump to: navigation, search

This page will serve as a basic how to play guide for Above the Fold. We urge you to check back often, as new information is being added all the time! Feel free to edit this guide with additional information. (Note: Please put any "spoilers" in the Tips and Tricks wiki page.) 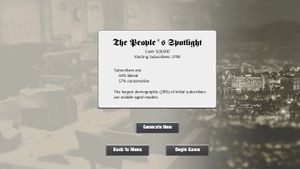 When you first start the game, you are able to select a newspaper configuration that will be your starting point in the game.

By clicking on "Generate Now", you can choose a new configuration to start the game, which will change the Newspaper name, the amount of cash, number of subscribers, and the political spread of the subscribers.

Once you have found a starting configuration that you would like to proceed with, click on "Begin Game". This will start the game and bring you to "The Office".

The game saves at the beginning of each new day, so if you’ve already played some, you will also have the option to continue that game.

NOTE: You can only have ONE active game at a time, so if you click New Game, any previous saved data will be overwritten.

NOTE: If the game starts in Windowed mode, use the keyboard shortcut F9 twice to switch to full screen.

You begin in the Office. Here you have an overview of the current status of your newspaper. 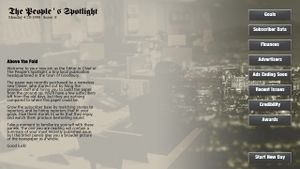 When a new game begins, you are given some cash and subscribers, but you will not yet have reporters or advertisers.

You do have some income from classifieds and what little subscribers you start with, but also overhead from producing the actual newspaper.

There are several blue information buttons on the right hand side of the page (above "Start a New Day" - don't click this one just yet). If you click an information button, it will open a window that you can position on your Office "desktop". If you leave the window open, the position and location of the window will be remembered the next time you come to the game, even if you start a new game!

The name of your newspaper, as well as the age and political spread of its initial subscribers, are all randomly generated at the start of the game.

Familiarize yourself with your starting point, and begin your first day as editor by clicking on "Start Your Day", when you are ready… 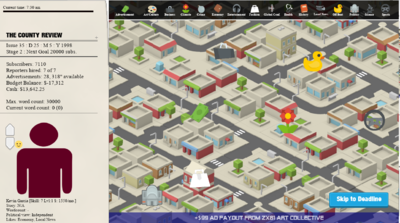 Goodbury is a small town with lots of activity! Scroll around The Map to find Reporters for hire, Stories to write, and Advertisements to pick up. You can use + and – on the number pad to speed up/slow down the game speed (starts at slowest).

How to Scroll around the Map[edit | edit source]

By default, the Map Legend is displayed on the top of the map, and shows the icons used for Advertisements and the different Genres of Stories. You can use the G key to toggle the map on and off. This is useful if you know the story genries, and you would like to see more of the map. 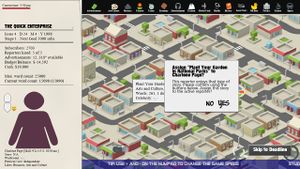 When you start the game, you may hire as many as 5 reporters. You stable will grow, as you progress to the next Game Stage. Progression is measured in how many subscribers your paper has. To get more subscribers, do your best to match stories with reporter Interest. This makes them happy, which makes them produce better stories, which raises the overall quality of your newspaper – all of which attracts more subscribers.

Unhappy reporters do not produce stories at a quality that lives up to their potential. Eventually, unhappy reporters may quit your newspaper, or get scooped up by a competitor.

When you have as many Reporters as you want, and they all have Stories assigned to them, you will want to spend the remaining time looking for Advertisements. They will appear as little stacks of paper money.

As with Reporters and Stories, clicking on an Advertisement will open a prompt. Here you can see the name of the company buying the ad, how many inches it is, and for how many days it will run. The player has the option to turn down the Advertisement, if it doesn’t fit with their strategy.

Once the deadline has been reached, you will be automatically advanced to the Editor's Desk. If you wish, you can also click the “Skip to Deadline”-button to leave the Map early.

Once the day’s stories are done (note: some stories take longer than a day to write), they appear on the editor’s desk for placement on the front page. The most important stories appear as icons and titles on the left of the blank front page. On the right, you can see an overview of the current issue, based on how the stories are currently arranged. If there are more than 5 stories, the additional stories will count towards your Issue Importance score, but you will not see them in the list of stories to be placed.

Once the issue goes to print, the day is over, and you are returned to the Office.

As a new day dawns, your game is automatically saved.

The left-most panel now holds a summary of your last issue. See its “importance score”, how many new subscribers it attracted (and how their age and politics spread), as well as number of complaining letters. The number of angry letters you get, is determined by the difference between the political spread of the content, compared to the spread of your existing subscriber base.

Events may occur! These are decision points, where your choice will influence the outcome of the game.

Below the Issue Summary is your Career Summary, which shows your current progress, your overall score, Awards won and the total number of angry letters received.

The Office has two new buttons leading to the sub-menus: 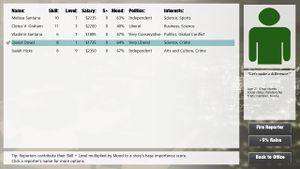 Under Manage Reporters, you can get an overview of your current staff. Select a reporter by clicking their name. You can Fire reporters you are dissatisfied with, or offer a raise to one or more reporters. These actions have consequences, of course.

Reporters with a green checkbox next to their name are working on a story that will take more than one day to complete.

When no reporter is selected on this screen, you have the option to buy all your reporters lunch (Quick TIP: if you have a reporter selected, clicking on the reporter's name or hitting the Right Arrow key will unselect the reporter). The cost depends on the size of your staff. If click it, there is a chance for each reporter to get a small happiness boost. This can be repeated as many times as you can afford.

When a reporter is selected, use the Up and Down Arrow Keys to cycle through them all. Right Arrow deselects. 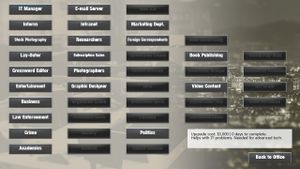 When your newspaper has earned sufficient funds, you can purchase Upgrades that can provide various benefits to different factors of the game. Be careful to not select too many Upgrades too early, though, as you will go bankrupt!

When you reach a pre-determined number of subscribers, you will "level up" to a New Chapter with an increased range of circulation. You will have the ability to hire more reporters, include more words in your newspaper, and obtain more ads... but you will also have increased office costs.

Currently, there are 5 Chapters: 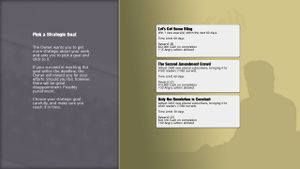 Every so often, the mysterious Owner will present you with three options of Strategic Goals to choose from. Each has a deadline and a goal to reach.

If you reach your Strategic Goal in time, the Owner will reward you with cash and forgive a few more angry letters. But if you should fail to meet your goals, you're in trouble. Do it 4 time total, and you're fired, so choose your quests carefully.

When you are ready, click the “Start New Day”-button to begin a new day. When you do, there is also a small chance, each of your reporters will lose some Happiness. This stat degrades over time, unless you manage your staff well.

To win the game:[edit | edit source]

The Boss loves a successful editor. There are several ways to win the game:

To Lose the game:[edit | edit source]

You are "fired" as editor of your newspaper when you lose the game. There are several ways to lose:

Resigning from the Game[edit | edit source]

The game is saved when you return to the Office. From the office, press the escape key. You will be asked if you would like to "Exit to Desktop". You can click "No" to return to the game, or "Yes" to end your gaming session.